Iron meteorites, with few exceptions, represent fragments from the cores of large differentiated bodies (for an explanation of differentiation, see the “achondrites” page).

Recent work has shown that some iron meteorite groups may have formed as little as ~10 million years after CAIs.  While irons are secondary in that they must have formed from the melting and/or differentiation of precursor chondritic  material, it seems that they formed right around the time of most chondrule/chondrite formation.  In fact, some have suggested that short-lived nuclides in the early solar system may have contributed to the melting and differentiation of even smaller asteroids (>60km diameter).

The implications of this are huge; earlier in the solar nebula, there were higher concentrations of these heat-generating elements everywhere.  This would likely have melted any sizable asteroid or planetesimal that formed prior to the chondritic parent bodies that  sourced our chondritic meteorite groups.  Radioactive nuclides would have progressively decreased in abundance, resulting in less-thermally altered parent bodies.  In other words, irons may have formed from older chondritic parent bodies, and the chondrites we know today may have accreted more recently.

So, while chondrites may be more primitive in that they appear to represent direct solar nebula condensates, irons may predate the rocks we classically consider to be the most primitive meteorites.  Because of this fact, some irons preserve some isotopic evidence from the early solar nebula no longer present in other meteorite groups.

Amazingly enough, we have enough samples from a few groups of irons that we are able to trace their parent cores’ solidification; different elements have different tendencies.  Some elements prefer to remain in the melt, and others are more attracted to the solidifying metallic phases.  Here’s a great paper showing how the compositional evolution of irons can be traced through the better-represented groups: Fractionation trends among IVA iron meteorites: Contrasts with IIIAB trends, by J. T. Wasson and J. W. Richardson (2000).

Irons are remarkably rare.  Since irons account for 8-10% of meteorites found (excluding those from Antarctica or the hot deserts of Africa and the Middle East), and they’re usually larger than stones, they have typically been viewed as relatively common meteorites.

But, in places where people have systematically searched for meteorites (Antarctica, Northwest Africa, Oman), irons account for a mere 1-2% of finds.  If witnessed falls are taken into account, irons are much less common than HED’s and most other meteorite types.  They’re unusual, they’re visually stunning, and they tend to withstand both weathering and ablation much better than stones do, resulting in meteorites with very aesthetic shapes.

Perhaps the most visually intriguing thing about iron meteorites is that most of them display a remarkable internal crystalline structure most often called a ‘Widmanstatten pattern,’ or ‘Thomson structure’ — most people refer to it with the former name, but Thomson’s discovery of the structure predated Widmanstatten’s by a few years.

The details regarding the formation of the structure are complicated and somewhat technical, but the basics are as follows:
1) The starting material is molten Fe-Ni mixture.
2) This mixture solidifies at ~1500°C and starts out in a particular atomic arrangement called taenite. 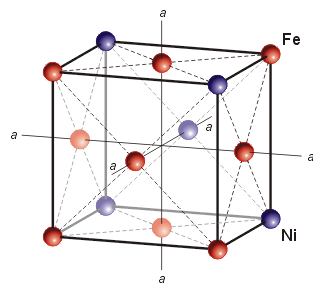 3) Between 1500° and ~723° the solid Fe-Ni mixture slowly rearranges itself atomically to a different structure called kamacite (the amount that changes depends on the amount of Ni present in the mixture as well as the cooling rate and impurities that facilitate nucleation and growth). 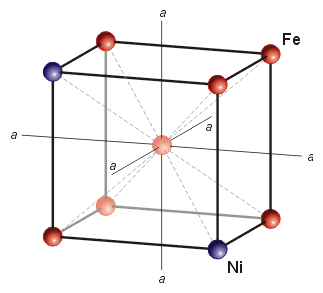 4) After it cools beyond ~720°, the atoms lack the kinetic energy needed to rearrange themselves and the pattern stops forming.

The key thing to note is that step three needs to occur over, at the very least, tens or hundreds of million years in order to give the atoms in the mixture enough time to rearrange themselves into the new crystal structure.  The cooling rate of the solid Fe-Ni mixture must be at most tens or hundreds of degrees per million years in order for a Thomson structure to form.

So, what do you see when looking at a cut and etched iron?  Most meteorite-enthusiasts would tell you that what you’re seeing is an intergrowth of kamacite and taenite.  That’s half true.  The octahedral structure that is seen in most iron meteorites forms because the kamacite preferentially nucleates and grows along the taenite’s octahedral crystal boundaries.  They don’t “grow together;” the kamacite grows at the expense of the taenite.  And, usually, the vast majority of what you’re seeing is kamacite.  Usually.  High-nickel meteorites (e.g. most ataxites) are made entirely of taenite. 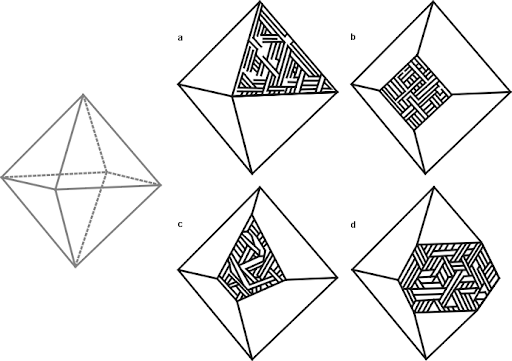 If you’re interested in what exactly goes on in the process, I would explore online — try here or here for a few good open-source papers.