This meteorite is a primitive achondrite.  It retained ~10% metal, some sulfides, and hasn’t changed much since it was a chondrite.  It has been thoroughly recrystallized, however, and there are no chondrules left.

What makes this meteorite particularly interesting is the isotopic signature of the oxygen in its rocky minerals.  That oxygen is a dead match for Earth’s.  That’s very unusual (*see below).  The ancient crystallization age of this meteorite (~4.54 billion years ago) suggests that it formed just after chondrites did, along with the other achondritic meteorites (HEDs, Angrites, Acapulcoites/Lodranites, etc.).  Some have hypothesized that this meteorite might represent a long-lost fragment of Theia; the ~Mars-sized body hypothesized to have struck the Earth ~4.5 Ga.  The current leading theory is that the ejecta resulting from Earth’s giant impact with a now-destroyed body (‘Theia’) formed a disk of ejected material that coalesced into the Moon.

Regardless of whether or not that theory is true, this is a cool rock with an enigmatic past that may be intertwined with our home planet’s.  Slices from this particular specimen were used in a study at the University of Chicago, looking to obtain a better date for the crystallization age of the rock.

*Update (4/2014): Upon a closer investigation of the oxygen isotopic data, I am not certain of why this meteorite was deemed different from the other brachinites.  The Δ17O value is less than most other brachinites, but when the data is viewed as a whole, it plots as only a slight outlier.  See below: NWA 5363/5400 oxygen isotope data are the slightly lighter orange circles (4) that plot along the terrestrial fractionation line (TFL) (see key).  Note the light blue/grey diamonds (brachinites, see key) just below them, in a line that doesn’t quite parallel the TFL.  Note the spread in the brachinite data.  Then check out the spread in the other classes of meteorites.  Note that many classes exhibit greater Δ17O spread (variation in distance from the TFL), and many classes have trends that don’t parallel the TFL.  If the average of the symbols representing individual points is taken for NWA 5363/5400, this meteorite plots very near the edge of the brachinite field.  Its bulk composition is essentially a brachinte. 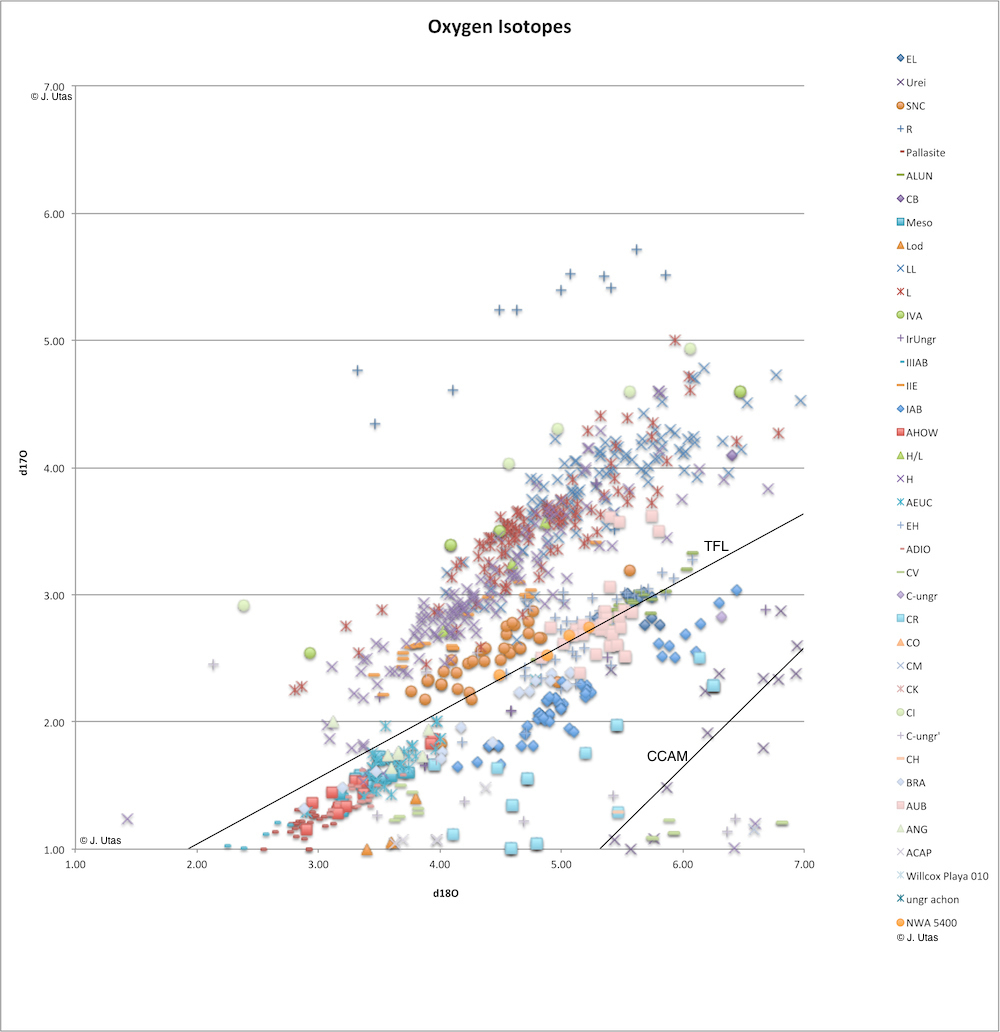 2020 Update:
This is a little late, but much more work has since been done on this meteorite.  Sanborn et al. (2016), published Cr-isotope data on NWA 5363 and pairings — that also confirm that this meteorite falls at the edge of the observed ΔCr range seen in typical brachinites.  It looks like brachinites outline a trend in O-isotope space that isn’t quite parallel with the TFL.  Or maybe, as Sanborn et al., propose, NWA 5363 and pairings are just from an asteroid very similar to other brachinites. 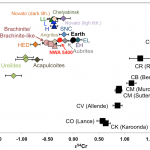 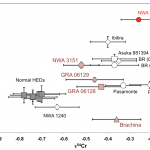 Regardless of what people eventually conclude, brachinites are some of the rarest meteorites around, and their similarities and differences compared to Earth make them very interesting.

Here are some photos of a 66.7 gram windowed fragment.  A larger specimen turned up later later; it is pictured below. 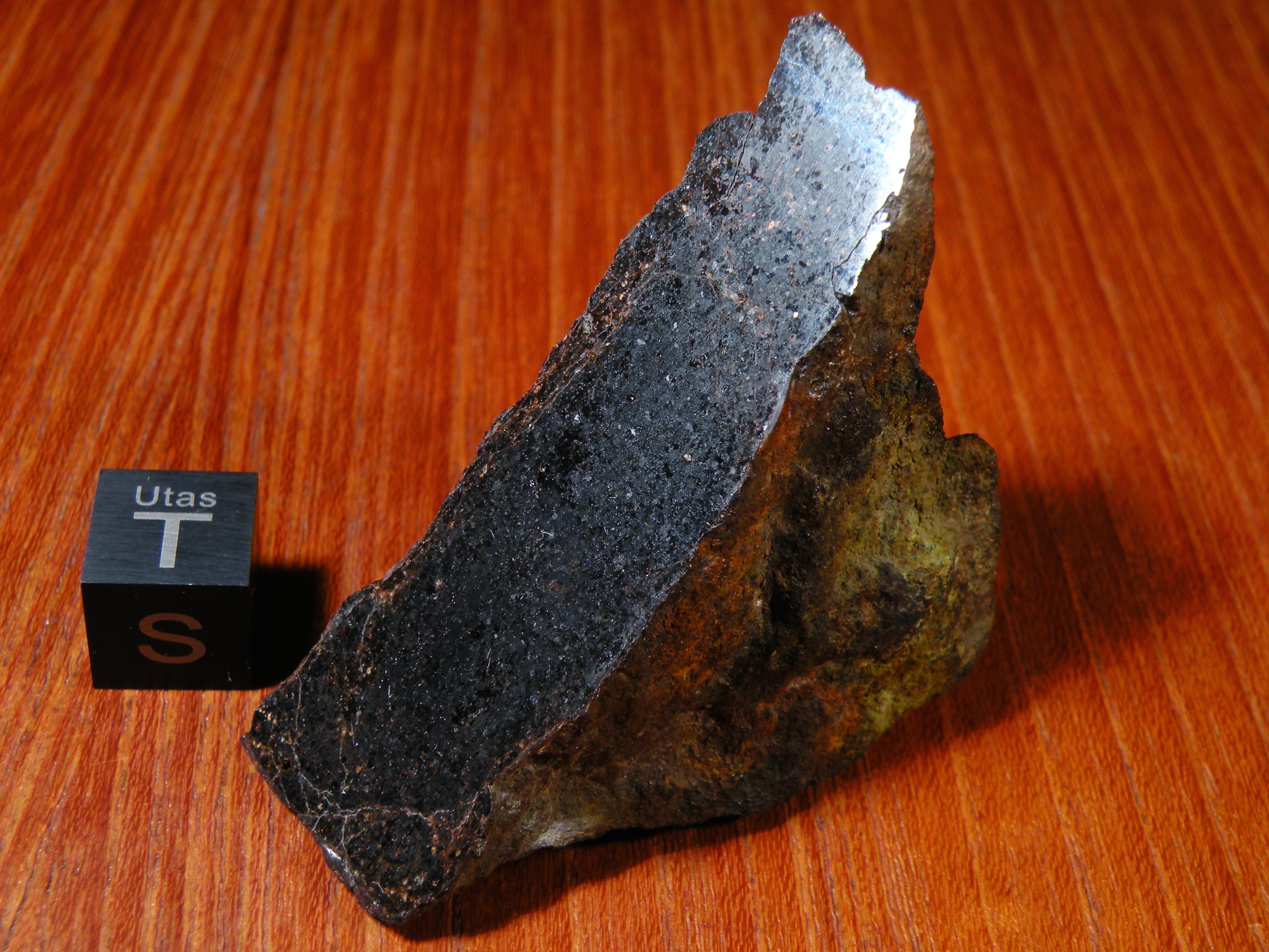 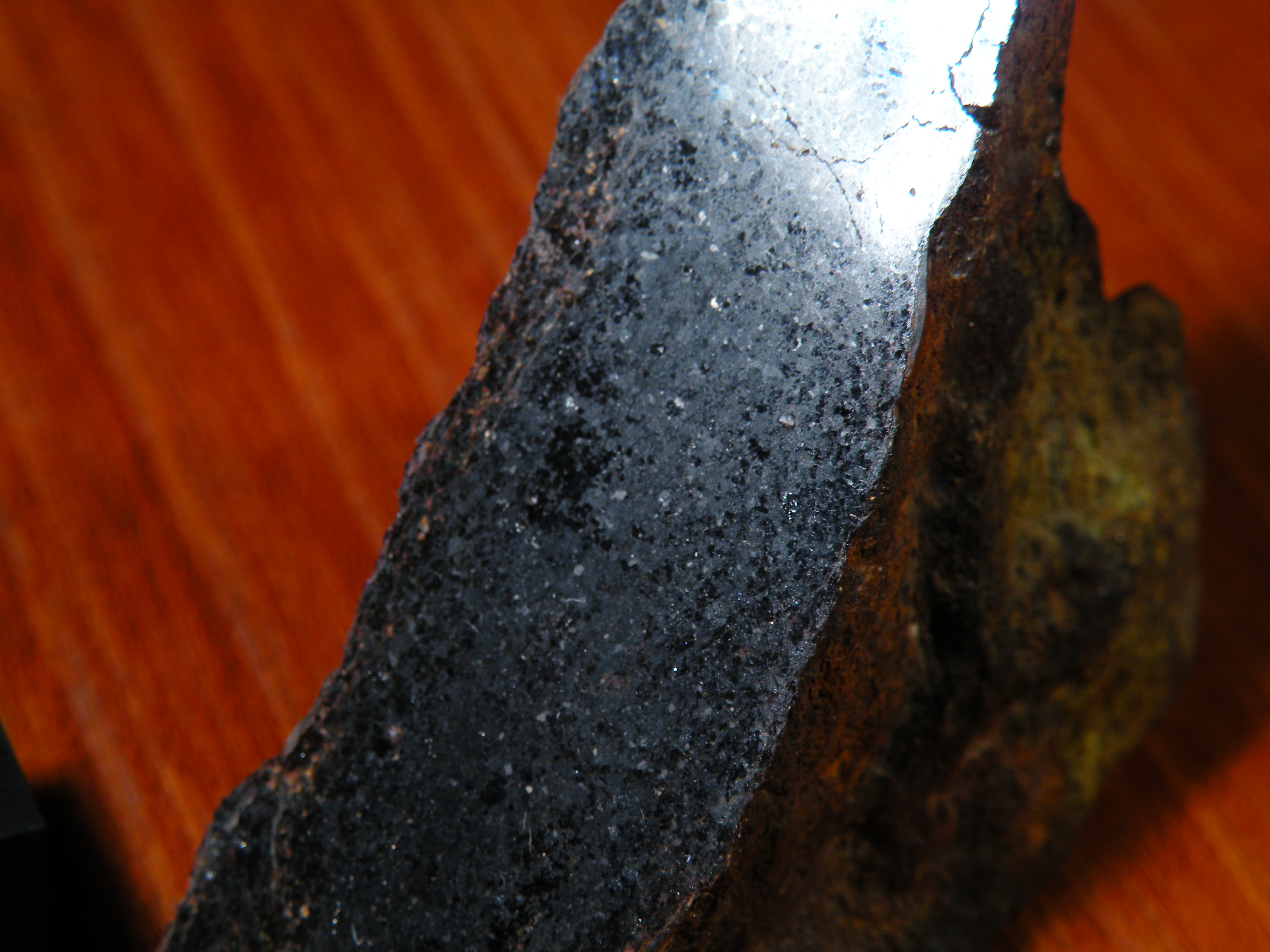 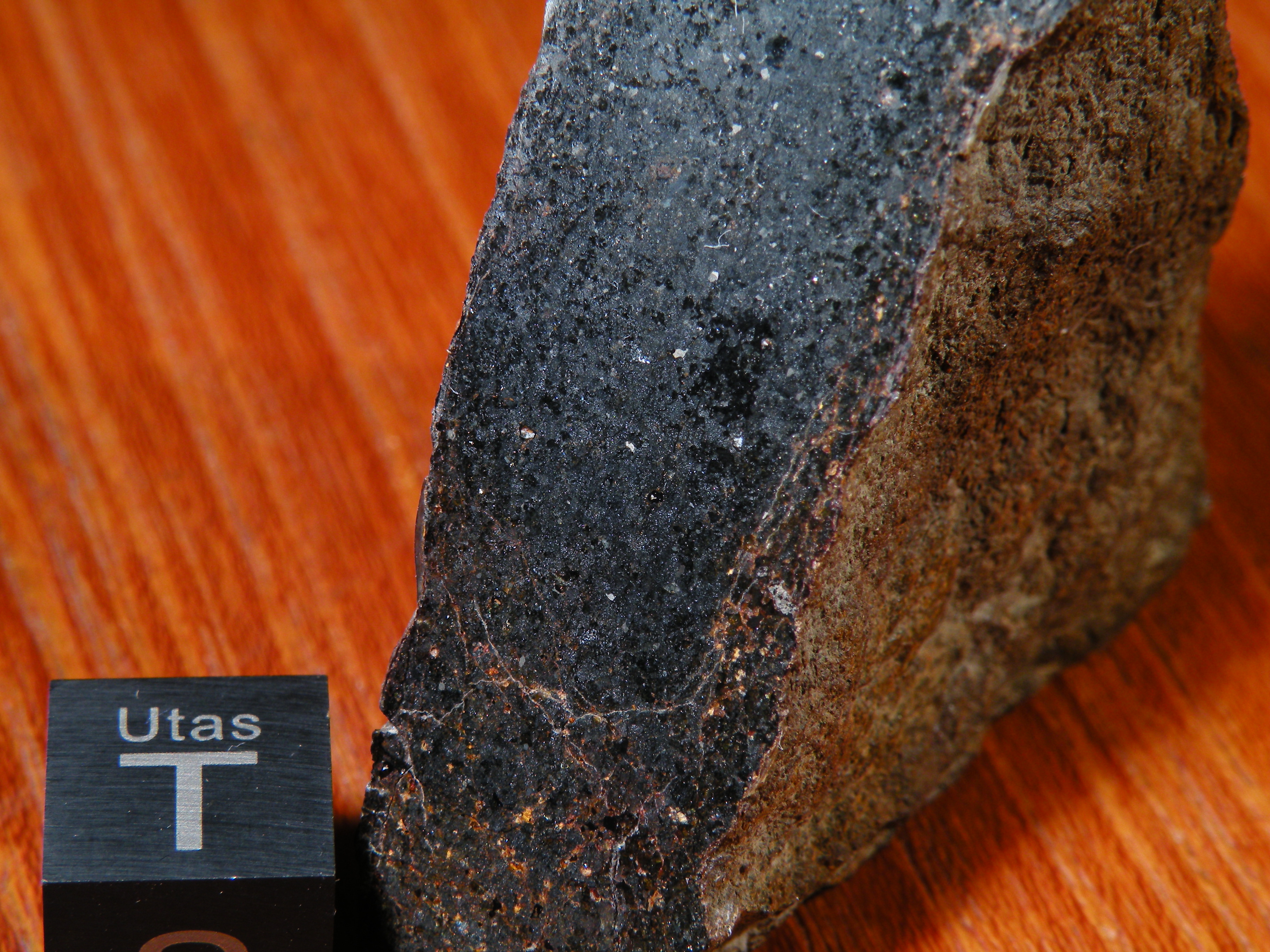 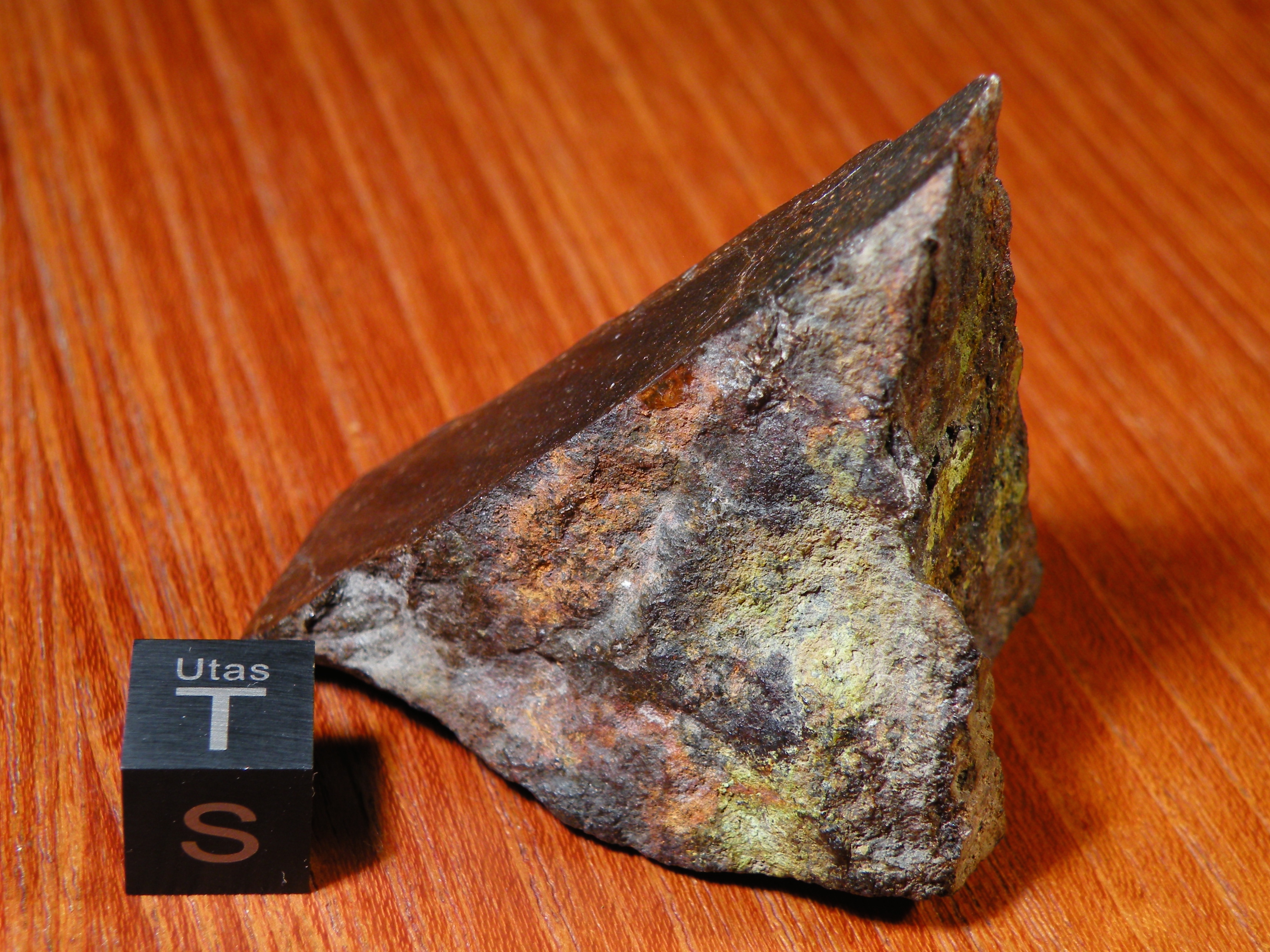 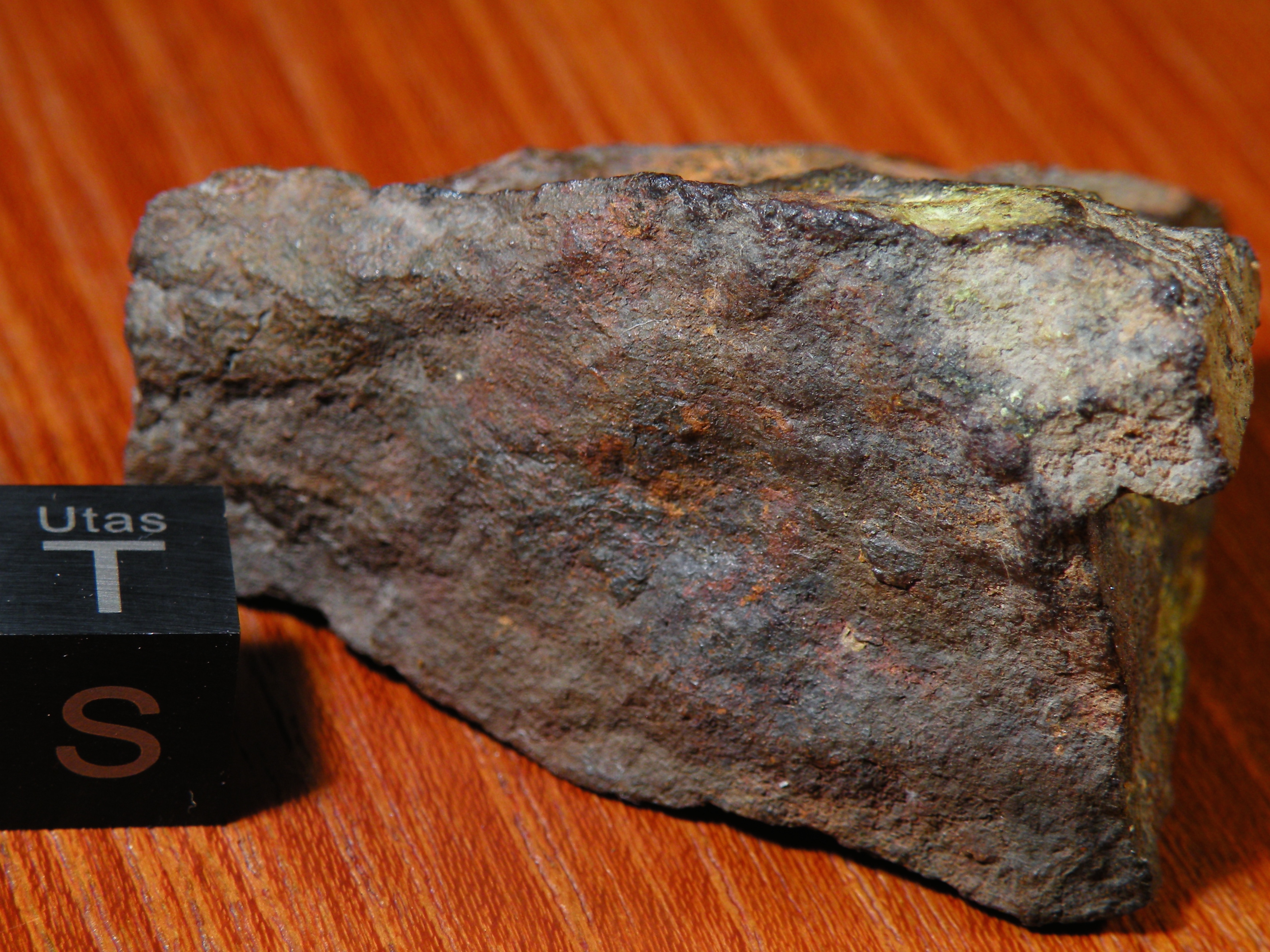 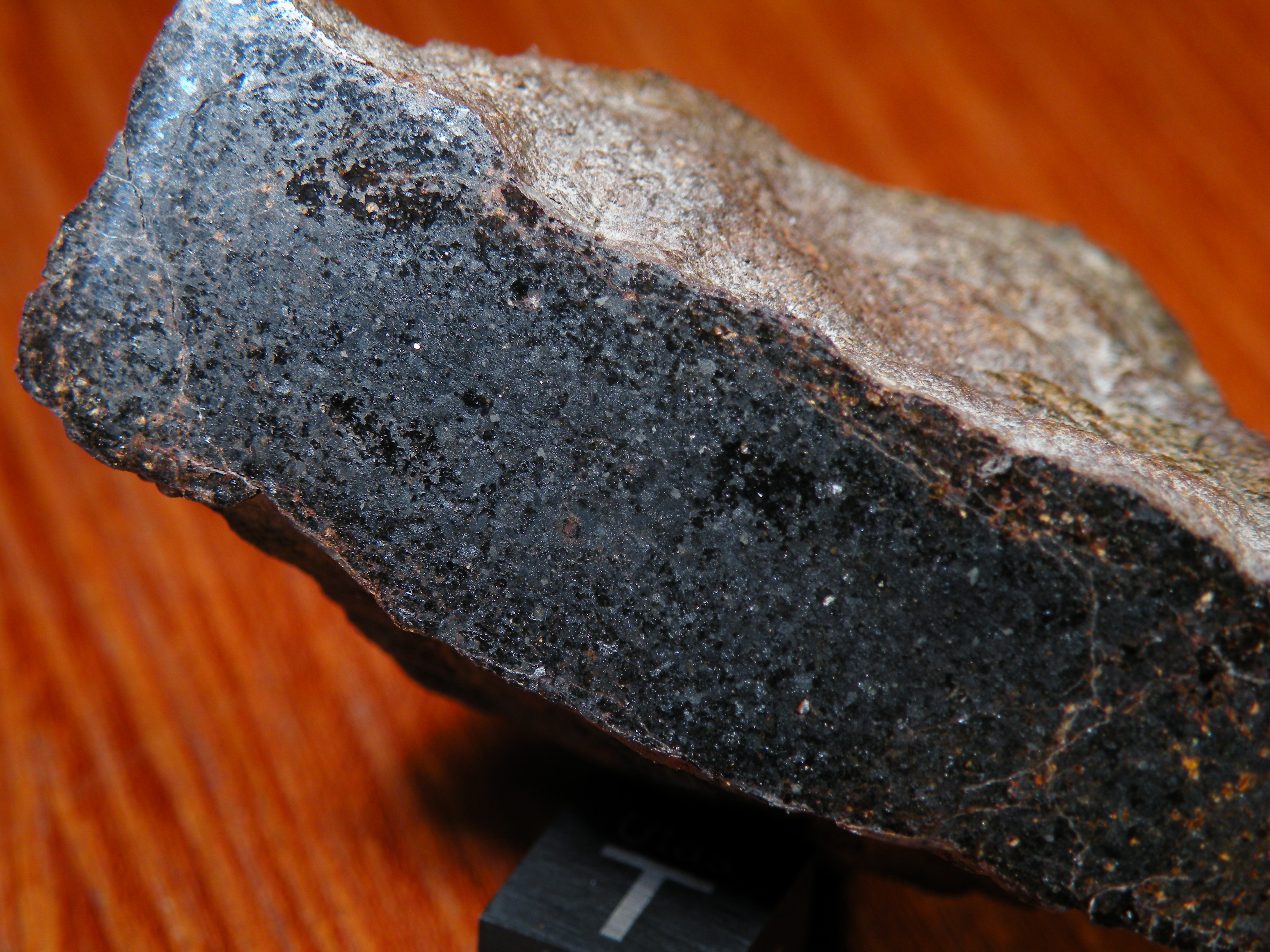 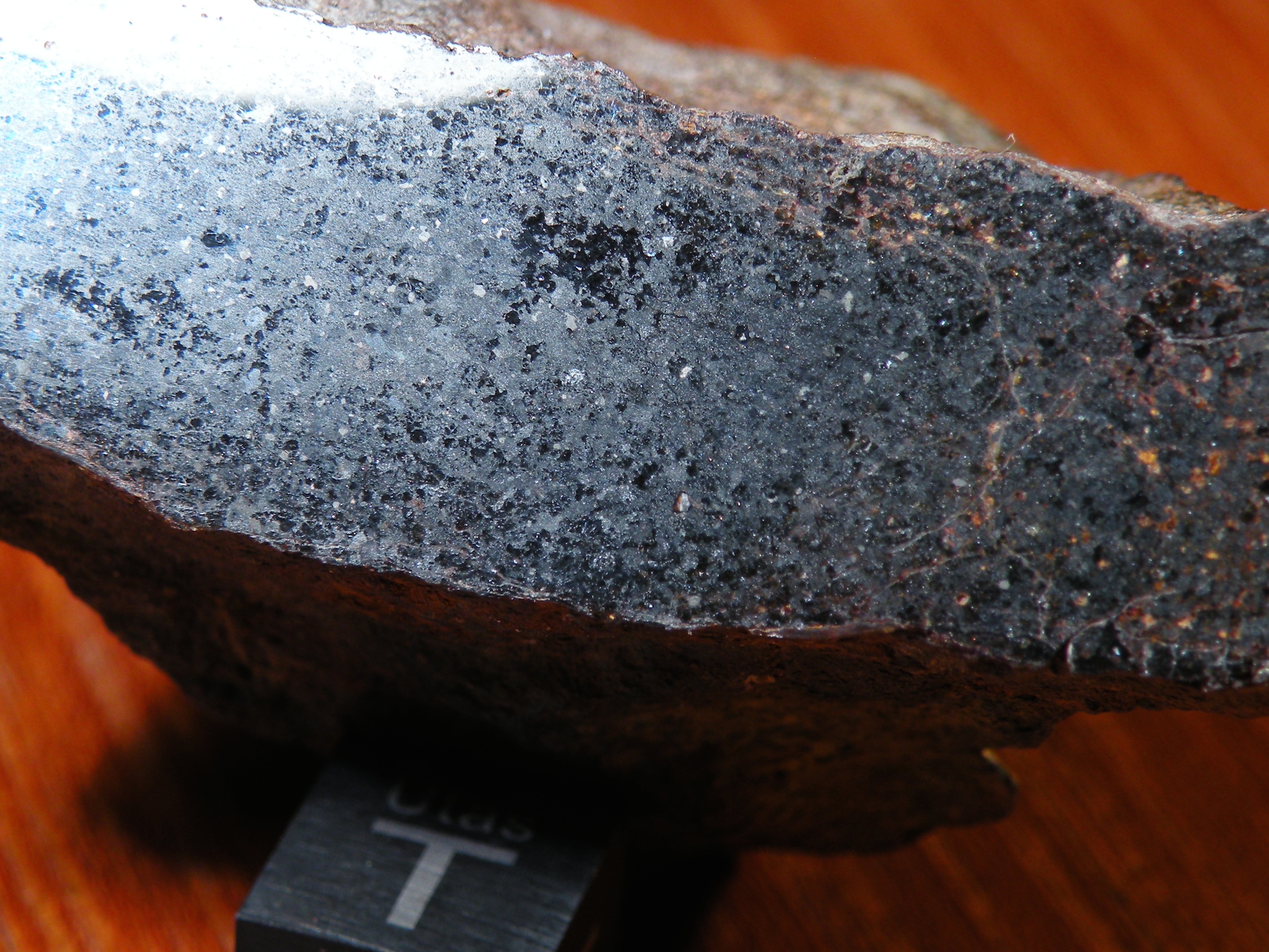 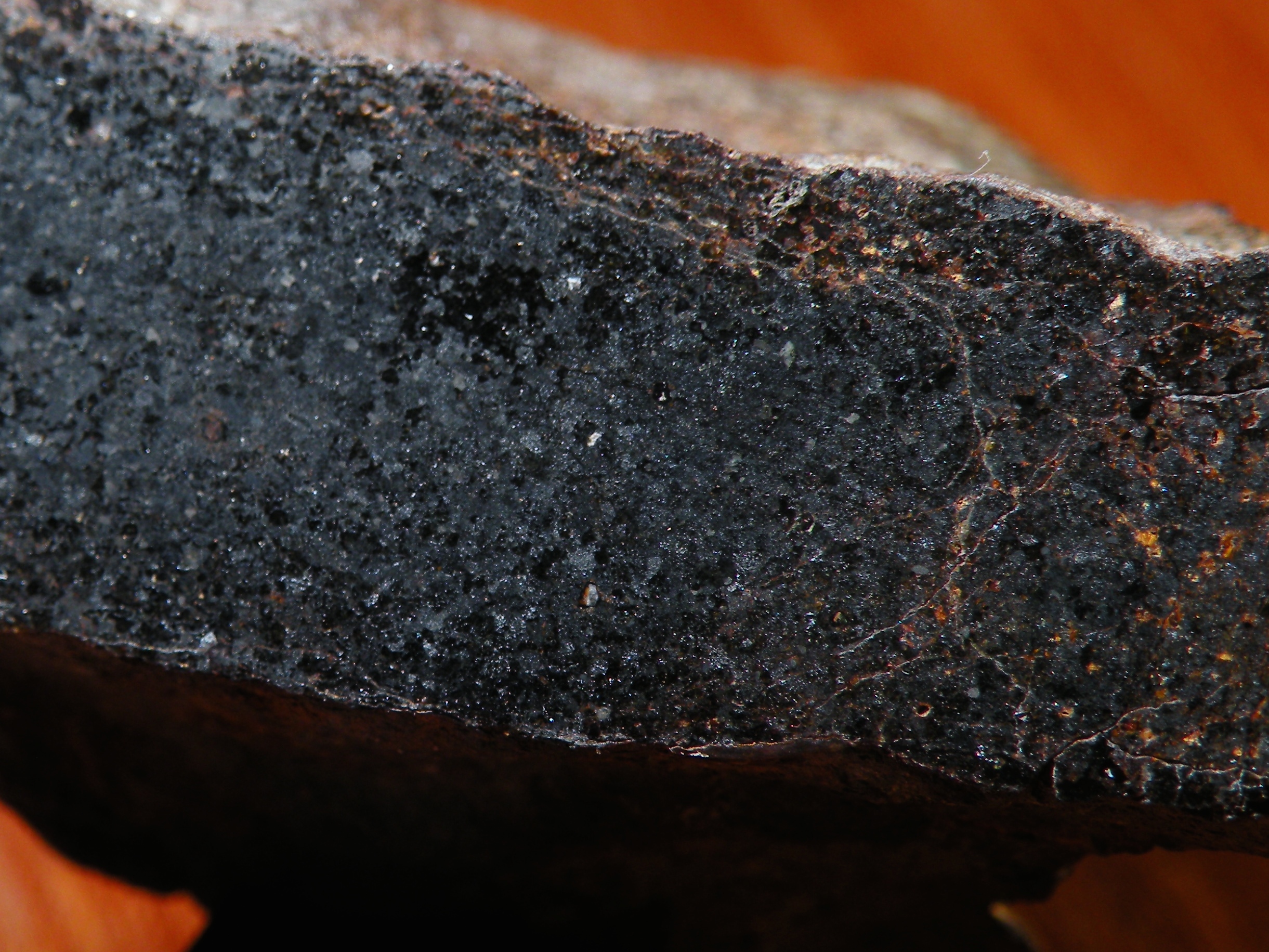 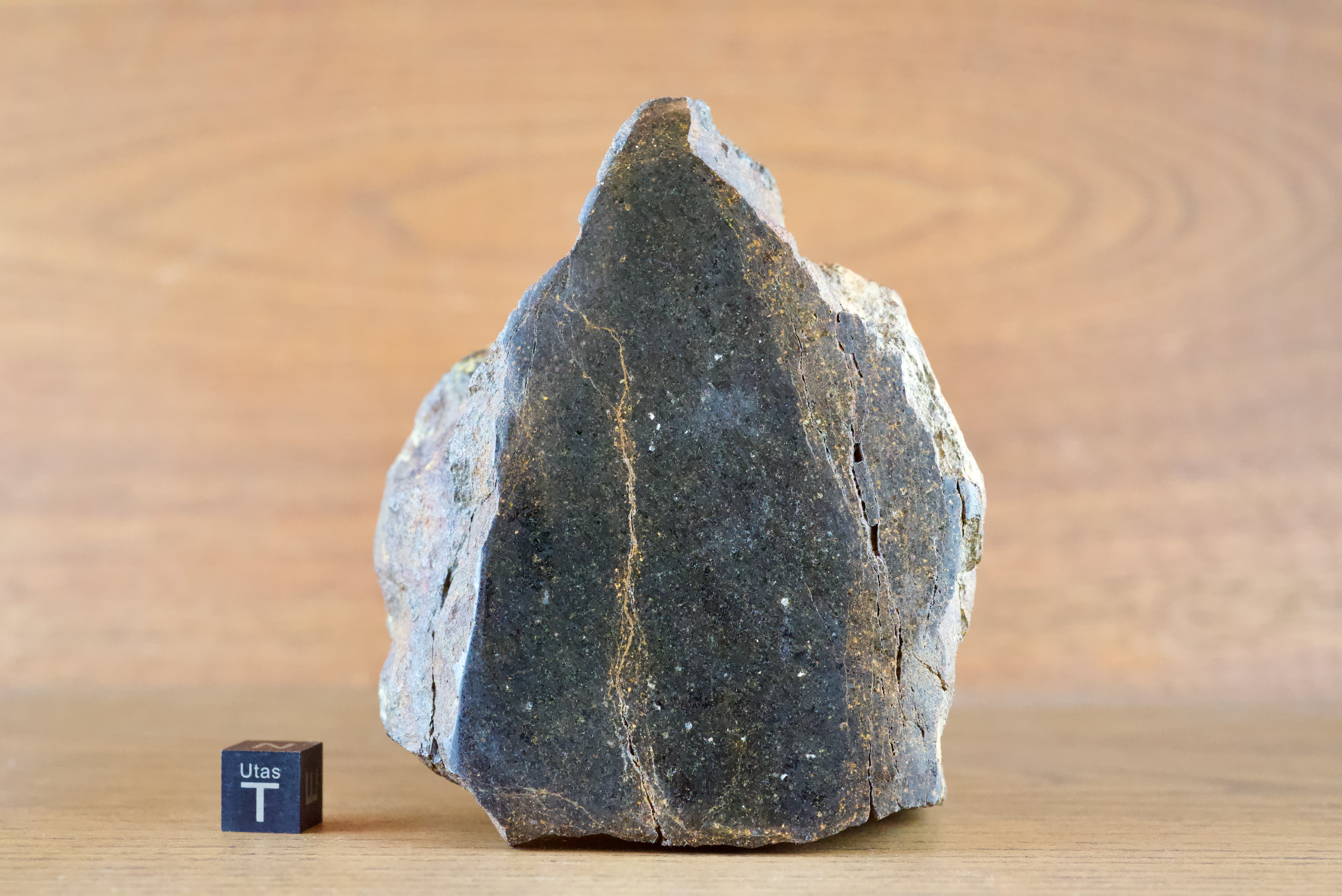 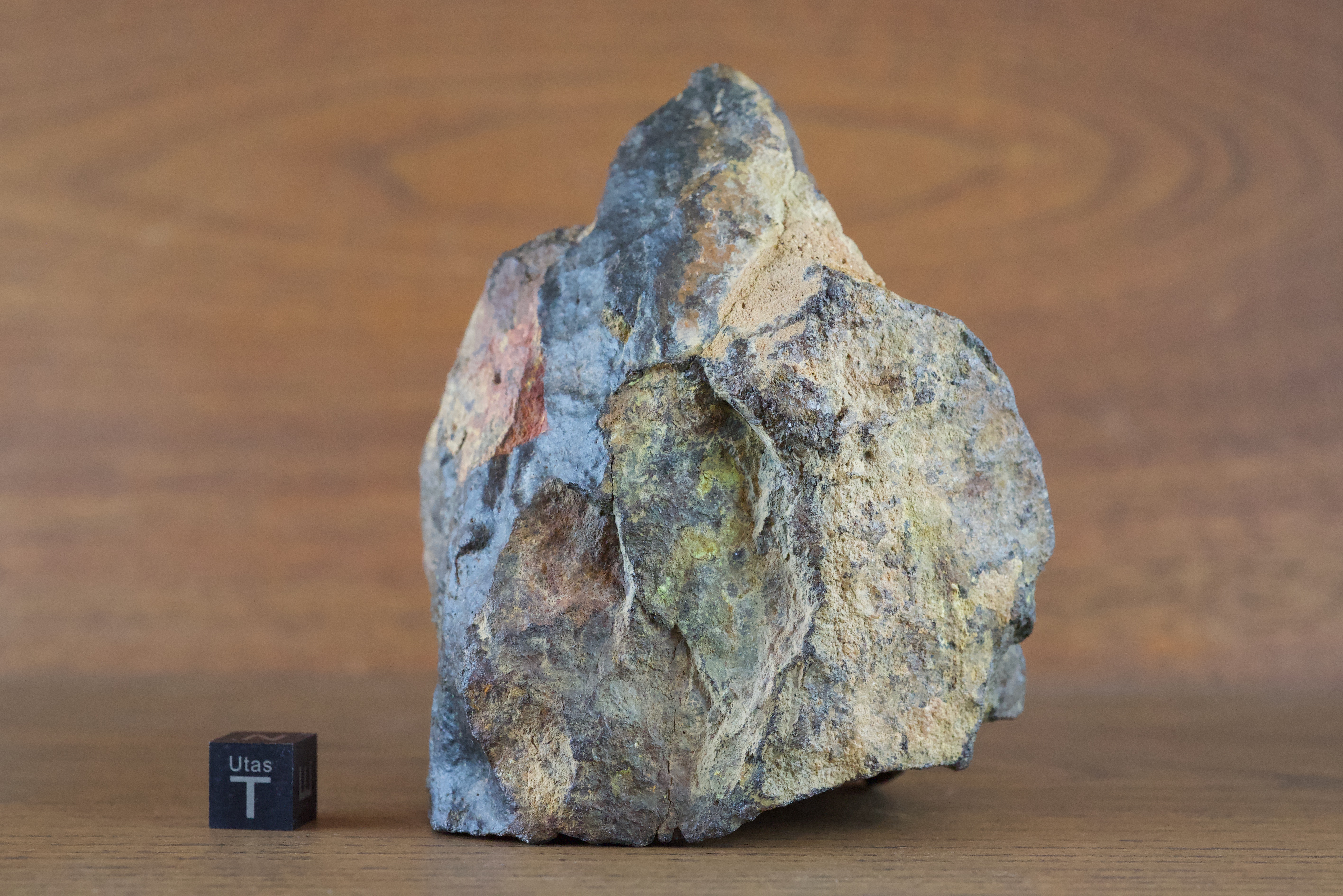 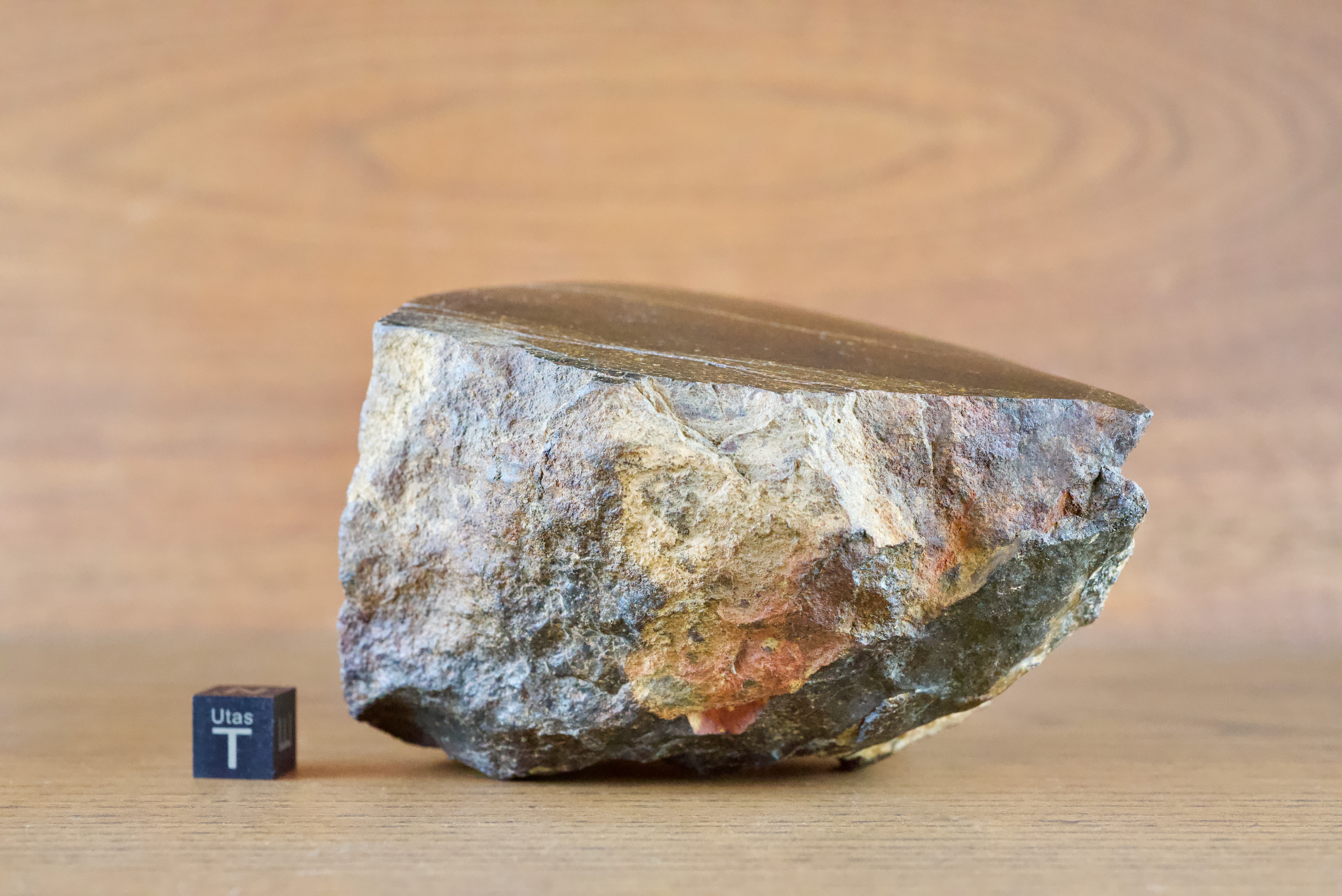